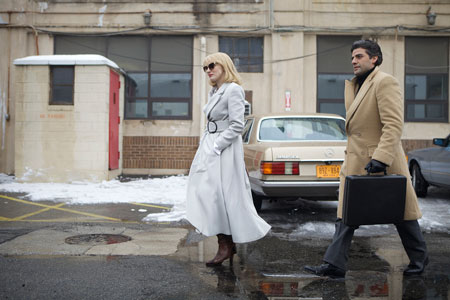 A Most Violent Year


When “New York, New York” lyricist Fred Ebb wrote that immortal line, “If I can make it there, I’ll make it anywhere,” it’s doubtful he imagined the life-or-death stakes such sentiments take on in A Most Violent Year, an ’80s-era NYC crime drama in which just making it from one day to the next seems like a major accomplishment. In his third turn behind the camera, writer-director J.C. Chandor has delivered a tough, gritty, richly atmospheric thriller that lacks some of the formal razzle-dazzle of his solo seafaring epic, All Is Lost, but makes up for it with an impressively sustained low-boil tension and the skillful navigating of a complex plot (…) it does much to confirm Chandor as a formidable filmmaking talent, and star Oscar Isaac as one of the essential American actors of the moment.