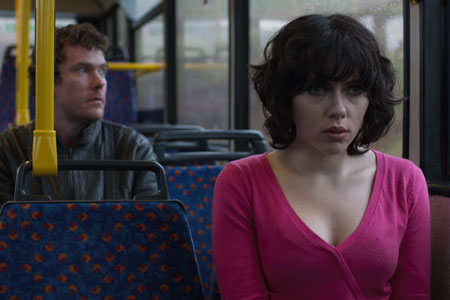 Under the Skin is perhaps best viewed as an icy parable of love, sex and loneliness. The director leads us between empty seashores and cacophonous nightclubs. He turns a hidden camera on the streets of Scotland and watches unnoticed as the people shop and smoke and tap out their texts.
Increasingly, it seems, Johansson wants to find a place in this throng. But try as she might, she can’t quite fit. The TV set is a mystery, and the slice of chocolate cake only sticks in her throat. Driving on the road, she encounters a fellow pariah, a young man with a bone deformity, who shops by night and has no friends. A little later we shall see this figure again, wandering naked and bewildered on the outskirts of town, just another lost soul who’s in search of a home.


Under the Skin was filmed in tones of darkness. Ms. Johansson’s expressionless character is frequently seen in shadow, out of which she emerges like a film-noir vamp. The van was equipped with tiny surveillance cameras to capture her interactions with the victims, real-life hitchhikers unaware that they were being filmed. Ms. Johansson’s husky voice, with its cultivated London accent, is as seductive as her body, which she brazenly displays. Because the men have thick Scottish brogues that render much of what they say unintelligible, they seem as alien as she does, and you begin to see these earthlings through her eyes.