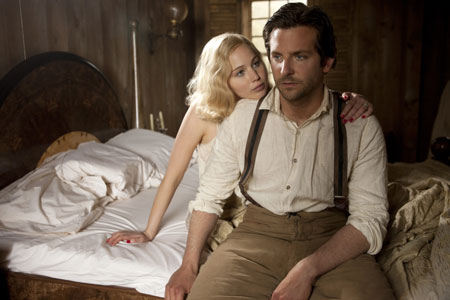 Lawrence brings her A-game. She is passionate, impetuous and confident, with a tough determination to grab the brass ring that has been presented to her. I loved her insistence that the company must bring in an eagle to keep down the population of venomous snakes, which are endangering the workforce, and that only she can be allowed to train the eagle. It is a gloriously queenly, almost Tudor moment for Lawrence, who has a glimmer of Cate Blanchett’s Elizabethan hauteur. Serena had surrendered eagerly, almost ecstatically, to the socio-erotic excitement of getting a marriage proposal from a handsome, wealthy man, and then she dominates him sensually in their married life, spurring him to greater achievements, and inspiring ruthlessness against those who get in his way.


Serena’s chilly, repeatedly self-severing storytelling is arguably more avant-garde than the plushly appointed star vehicle that surrounds it, though it’s hard to gauge the film’s own awareness of that disconnect. The first encounter between logging baron George Pemberton (Cooper) and Lawrence’s feisty title character is a case in point: They meet on horseback, the wind caressing their respective tresses, and his opening line is, “I think we should be married”. It’s either an instant of heightened romantic fantasy or a bitter parody of such a Hollywood-fostered ideal; Bier’s typically measured, tasteful direction doesn’t let on which.