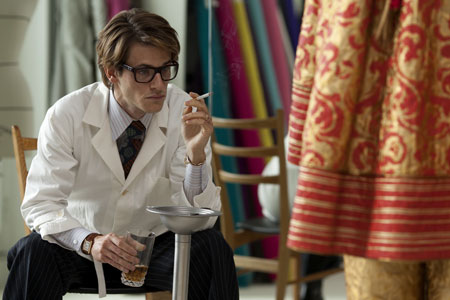 Bonello’s film covers less chronological ground than Yves Saint Laurent but goes a little harder on the hedonism, as you’d expect from the heedless director of House of Pleasures and The Pornographer. Bonello’s script, written with regular Jacques Audiard collaborator Thomas Bidegain, focuses less on Saint Laurent’s troubled romance with life partner Pierre Berge (which formed the spine of Lespert’s film) than on his individual neuroses, insecurities and delusions. As such, it’s a less flattering portrait, with machete-cheekboned Gaspard Ulliel an aloof, glassy presence throughout; he’s a more dreamily charismatic presence than Pierre Niney, the twitchy lead of the last film, though he bears less of a physical or behavioral resemblance to the subject. The upside for Saint Laurent’s admirers is that Bonello’s film reflects more of the designer’s tortured creative drive in its dark onyx surfaces; it’s the slightly deranged auteur portrait that a fellow artist and iconoclast deserves.


Beginning in 1974, the in-demand Yves Saint Laurent (Gaspard Ulliel) is in incognito mode posing as Mr. Swann (the first of many Proust references) escaping to Paris to get some shut eye. In his room, with the Eiffel Tower almost completely covered in mist, he calls a publication and agrees to do an interview. The movie then jumps back to 1967 where every inch of the female body is measured, identities are reduced to numbers, and the atelier of the Saint Laurent fashion house is imagined as a sophisticated laboratory. Laurent appears constantly bored with everything around him, creative inspiration non-existent, and his overflowing agenda – conveniently dictated to him by assistants – merely an interruption to his music. Laurent’s partner and lover Pierre Berge (Jérémie Renier) lovingly feed him chocolate, the narrative transports itself to a club scene where, in the briefest of genius moments, Saint Laurent sees himself in a blonde dancer called Betty (Aymeline Valade) and asks her to work for him.