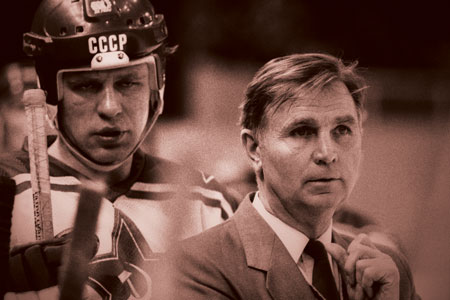 Cultures clash on and off the ice in Gabe Polsky’s documentary about the Soviet Union’s dominance of ice hockey during the cold war, and its former stars’ place in modern Russia.

The Red Army ice hockey team were the Soviet Union’s proof that socialism worked. They played as a collective. No one player was the star, instead they scored goals communally, pushing the puck around their team before shooting with power and deadly accuracy.


On one level, Red Army is a potent study of an unusually incestuous link between sports and politics, and the enormous personal toll it exacted from players forced to serve multiple masters. On another, it’s the story of how the brave migration of a few athletes opened the door for many more to follow suit, flooding the ranks of the NHL with Soviet talent. But the strength of Red Army lies in its deep appreciation for the many ironies of the situation, the bone-deep complexities of national identity, and the fact that, on some level, home will always be home.


A man with prodigious pride and no shortage of ego, Fetisov is also an enjoyably combative interview, shrugging off Polsky’s questions with deadpan humor and sly sarcasm.