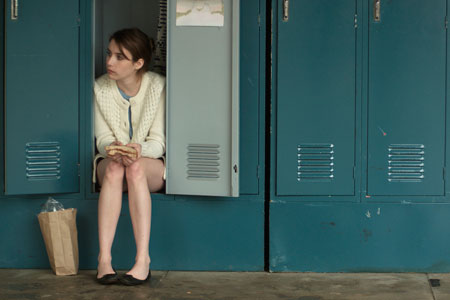 “Palo Alto” is a very strong first feature, prioritizing mood over message. Coppola does not diagnose underlying societal problems; she does not make assumptions about the cultural void in which the kids live. She just shows us what they do, moving in and out of different narratives, interspersed with moody, misty shots of a mainly-empty-looking Palo Alto — street lamps at night, quiet playgrounds, sunset hitting the tree tops. It all feels a little bit like a dream, like the characters will look back on it and think, “Did it really happen like that? Or was I just stoned the whole time?”


The kids in Gia Coppola’s Palo Alto move as through a dream. It’s a drifty, appealing story, set in the Northern California city that gives the movie its title, about that twilight period between childhood’s end and the start of young adulthood. Here, under wavering palm trees, teenagers slip through homes and streets with the vagueness that comes with certain visions of adolescence.

(…) Although it is set in the present, Ms. Coppola gives the story an out-of-time quality that dovetails with its out-of-place vibe.

What tethers the movie and especially April and Teddy is how Ms. Coppola captures that exquisitely tender, moving moment between fragile, self-interested youth and tentatively more outwardly aware adulthood, a coming into consciousness that she expresses through their broken sentences, diverted glances and abrupt turns. (Nobody processes his or her feelings; they simply are.) Slowly, this incompleteness gives way to a sense of wholeness, if not closure; these stories, after all, are just beginning. And however familiar, they are ones that Ms. Coppola (…) pulls you into with color, light and feelings as lovely as caresses.