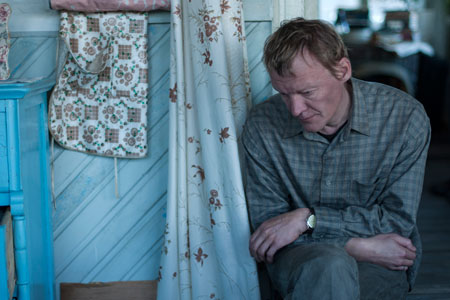 At age 50, Russian master Andrey Zvyagintsev delivers a stunning, surprisingly funny satire (…) In Leviathan, which director Andrey Zvyagintsev has described as a loose retelling of the Book of Job, an ordinary man must wrestle with his faith not in God but in the Russian state — an epic struggle against a monster with many faces possessed of the capacity to bend the law to suit its own appetites. Resistance is futile, as they say, and yet this stunning satire’s embattled patriarch valiantly perseveres for the sake of his family, even as it crumbles around him.

The setting is a small town on the Kola Peninsula in northwest Russia, a has-been fishing community littered with the carcasses of ships and whales alike, far from Moscow and yet close enough to “civilization” that the locals can practically see Finland from their backyards. As some will surely recall, Leviathan was the book in which the English philosopher famously suggested that an ideal government protects citizens from lives that are “solitary, poor, nasty, brutish and short”.