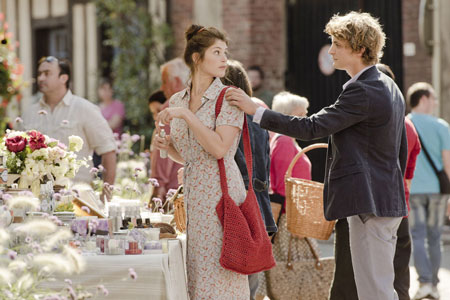 The time period and spelling may be different, but Gustave Flaubert’s most famous creation is very much alive in Gemma Bovery, a breezy postmodern update of the classic novel that replaces the book’s darker passages for tongue-in-cheek laughs and plenty of eye candy — whether it’s the sprawling Gallic countryside, a bakery filled with boules de pain or else Madame Bovery herself.(…)

After quitting the world of Paris publishing, Martin Joubert (Luchini) moves back to his Normandy hometown to take over the family bakery, bringing along his nagging wife (Isabelle Candelier) and nitwit of a son (Kacey Mottet Klein). Nothing much happens in their humdrum little village until a newly married couple moves into the country house across the street: the British expat Charlie Bovery (Jason Flemyng) and his gorgeous younger wife, Gemma (Arterton).
Immediately seduced by Gemma’s beauty, as well as by the fact that she has nearly the same name (and as he will soon learn, same life) as Flaubert’s heroine, Joubert starts keeping tabs on his new neighbor while striking up a friendship that’s filled with underlying sexual tension, at least on his part.