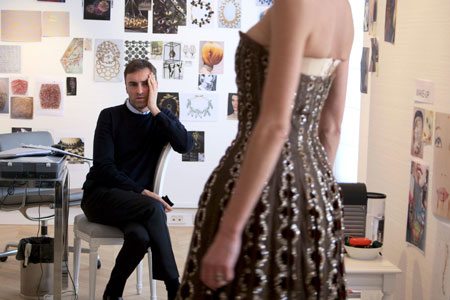 Here, Tcheng acts less like a fly on the wall at the House of Dior and more like a silkworm creating the threads. So intimate is his camera that the viewer can feel the fabric of the dresses being made with a special technique called imprimé chaîne (printing the thread before weaving) for newly-minted Dior creative director Raf Simons’ first haute couture show.


We meet Simons just as he is introduced to the designers and seamstresses who will be working closely with him in the eight weeks before his first Dior couture collection premieres. Eight weeks sounds like frighteningly little time, especially since Simons has never done haute couture before. (He also doesn’t speak French.) And as expected, the film develops a ticking-clock mood as it progresses, observing the team spirit of pros who pull all-night stitching sessions and are mostly happy to do it.


Fashion documentaries often suffer from the preconception that pricey clothes are frivolous and therefore unworthy of serious attention, or they’re relegated to the “guilty pleasures” pile. Yet design is about creativity, and the dialogue that designers have between past and present is akin to painters’ influences: the process is intrinsically fascinating. Fast-rising helmer Frédéric Tcheng brings out this element and much more in his beautifully crafted Dior and I, which follows Raf Simons as he launches his first haute couture collection for Christian Dior in spring 2012. Multilayered, meticulously woven and a model of its kind, the docu deserves a place on specialized screens as well as TV.